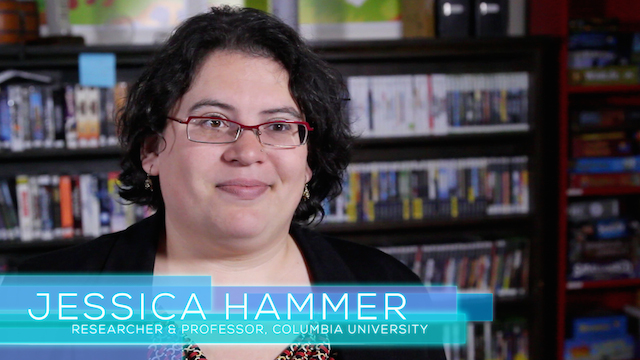 Jessica Hammer is a professor, researcher and veteran game designer. She studies how games can change the way people think, feel, and behave.

Jessica received a master’s degree in Interactive Telecommunications from NYU and her BA in Computer Science from Harvard University. She works in collaboration with Carnegie Mellon University and Columbia University as well as New York University.

She has taught at NYU’s Interactive Telecommunications Program, consulted for both academic and business clients, and worked at noted New York game company GameLab.

Jessica developed the game design course sequence for the Communications, Computing and Technology program at Teachers College Columbia University. She is a founding member of the Teachers College EGGPLANT game research laboratory and is a member of its Creativity Research Group.

In her previous work, Jessica was a writer, consultant and game designer with an emphasis on serious games and social software.

Jessica worked on the design of Stronger Together, which works with teenage girls to practice emotional skills and forge social connections with each other through gameplay.

[Tweet “I think that we tend to forget that when we are looking at a screen we are also still in our bodies.”]

[Tweet “One model to think about how games can help people is that games can give people a sense of strength.”]

[Tweet “Human beings are social animals. Our fundamental needs include needing to belong to a group.”]

[Tweet “Part of how we feel a sense of belonging is actually through offering help.”]

Jessica can also be seen in: