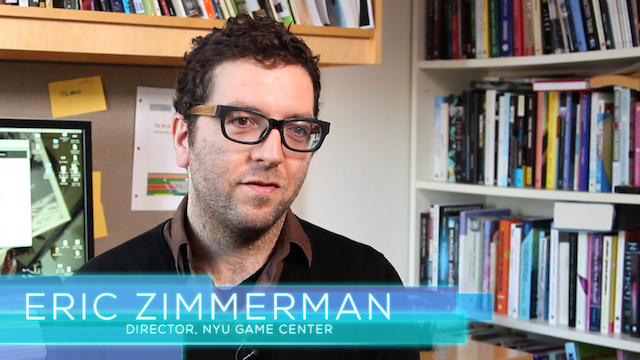 Eric was the co-founder and Chief Design Officer of Gamelab, a NYC-based game development studio which was in operation for nine years. Since Gamelab, Eric has worked on a wide range of independent projects. He also co-founded the Institute of Play, a thriving non-profit that has created schools based on games and play as the model for learning.

In addition to creating dozens of games of all kinds, Eric has taught at MIT, School of Visual Arts and Parsons School of Design. He is a founding faculty member at the NYU Game Center and a full-time Arts Professor at Tisch School of the Arts.

Eric is the author, with Katie Salen, of Rules of Play: Game Design Fundamentals, the standard textbook for game design, and of The Game Design Reader, an anthology of readings about the design and culture of games.

He has received numerous awards for his work in the game creation community, including a “VIP Award” from the International Game Developers Association. Other recognitions include: New York Observer’s “Power Punks”, Interview Magazine’s “30 To Watch”, International Design Magazine’s “ID 40” list of influential designers, and The Hollywood Reporter’s “Digital 50”.

Recent projects include Leela, a game for the Xbox Kinect developed with Curious Pictures and Deepak Chopra, and the award-winning short film PLAY, a collaboration with filmmaker David Kaplan.

[Tweet “Games are a cultural universal, so human beings play — and play games in virtually every culture…”]

[Tweet “Today games have a special role and relationship to the times in which we live.”]

[Tweet “We’re living in an era of digital tech, where so many aspects of our lives are mediated by networks.”]

[Tweet “Games are relevant because in a sense they are the cultural form of systems.”]

[Tweet “With a game you really have to interact with a dynamic system in order to move the game forward.”]

Eric can also be seen in: