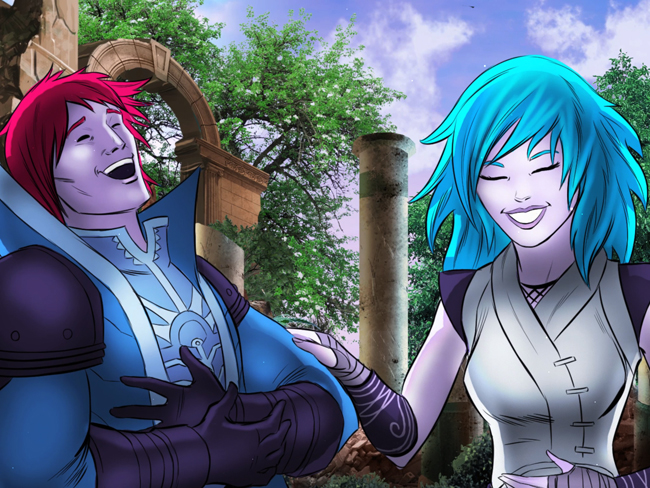 Toronto, ON [June 16, 2016] — Love, empathy, camaraderie and compassion are just a few of the themes explored in Avatar Secrets, an interactive documentary now screening via an app for the iPad and iPhone, and as a 10 episode web series on Vimeo. Written and directed by creator and storyteller, Ramona Pringle, Avatar Secrets in a truly unique project and one of the first feature-length documentaries to be developed as a fully interactive stand-alone app.

A digital project in form and content, Avatar Secrets explores the complexities of human connection in the wired world, examining the evolving nature of community, relationships, empathy and interdependence in the real world — and the digital frontier.

Based on the real-life experience of Pringle, a former Interactive Producer for PBS’s Frontline, the POV doc features additional video commentary from some of the foremost thinkers in media and technology.

The story begins in New York City where Pringle has the perfect job, terrific friends and a great boyfriend. That is until it all comes crashing down. With her mother sick, Ramona packs up her charmed life and returns to her hometown. A few days later her boyfriend breaks up with her, right when she needs him the most.

Stuck in her childhood bedroom and dealing with a broken heart, Ramona ventures online and into the world of MMORPGs (massively multiplayer online role-playing games). There, she creates an avatar, a healer named ‘Tristanova’, and sets off on her first quest.

After reaching Level Two, Ramona finds herself lost and alone in the vast expanse of the game world. Eventually, she asks another player for help. This leads her to discover the first ‘avatar secret’ — that the hardest part of the quest isn’t the quest itself, it’s admitting that you can’t do it alone.

Originally released in Canada for the iPad, where it was an App Store Editor’s Choice and Featured and ‘Best New’ App, Avatar Secrets has been seen at major documentary, film and interactive festivals, including: HotDocs, Sheffield Documentary Festival and TFI Interactive, part of the Tribeca Film Festival. The story was first conceived and presented by Pringle at SXSW where it was covered in a New York Times feature article.

App viewers can watch the “appumentary” in two ways: in movie mode or in interactive mode.

In interactive mode viewers can swipe through scenes and touch ‘hot spots’ to reveal rich-media footnotes and uncover hidden content.

For viewers who want a more streamlined experience or who don’t own an iPad or iPhone, the app’s 10 animated chapters can be streamed on Vimeo or from the Avatar Secrets website.

The first three chapters of Avatar Secrets are now available for free from the App Store. An in-app purchase unlocks the next seven chapters as well as additional live-action and documentary content. The app sells for $4.99 (US). Check your country store for pricing or to download.

To view the trailer, visit http://vimeo.com/avatarsecrets

About Ramona Pringle:
Ramona Pringle is a professor and digital media producer who studies our evolving relationship with technology, each other, and the world around us. A sought after speaker and commentator, Ramona is the National Technology Contributor to CBC Radio. She has presented at events including Social Media Week, SXSW, NXNE, TEDx, Ignite, the World Future Society, and Tribeca Interactive. Ramona has a Master’s Degree from NYU’s Interactive Telecommunications Program, and is a faculty member at Ryerson University’s RTA School of Media where she teaches at the graduate and undergraduate level and acts as the Concentration Coordinator for Narrative Media, and the Creative Director of Ryerson University’s RTA Transmedia Centre. In 2013, she was named one of the “10 to Watch” by entertainment trade publication, Playback. Avatar Secrets is her first feature-length ‘appumentary’.

Welcome To The ‘Making Of’ Avatar Secrets