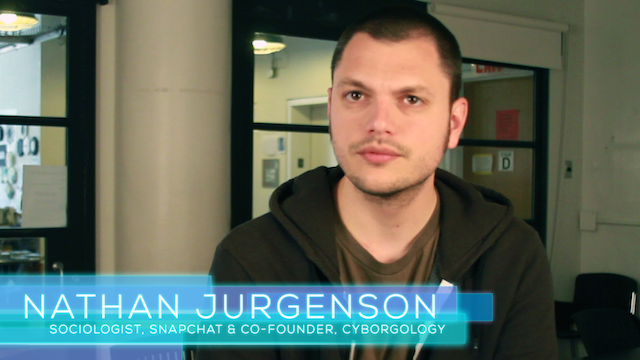 Nathan Jurgenson is a social media theorist, a contributing editor for The New Inquiry Magazine, researcher for Snapchat, and a graduate student in Sociology at the University of Maryland where he is working on a dissertation on surveillance on social media.

Nathan’s research comes from the belief that we increasingly live in an “augmented reality, ” a perspective that views the digital and physical as entangled as opposed to viewing them as distinct — what he calls “digital dualism”.

His 2012 essay “The IRL Fetish” was named by The Verge as one of “the 25 best reads on the web this year” and was covered widely, including in The New York Times.

Nathan’s writing has also appeared in other sources such as Wired, The Atlantic, Salon, Sociological Images, Racism Review, Inside Higher Ed, OWNI, The SIPP, Corriere della Sera (Italy), Omni, and others.

His essay, “The Faux-Vintage Photo, ” was covered by NPR, The Boston Globe, Slate and has been translated into French and Russian.

Nathan and colleague PJ Rey founded the Cyborgology blog, and together they also created and ran the Theorizing the Web conference.

You can hear Nathan discuss social media every month on WYPR (Baltimore NPR affiliate). He was interviewed live on the CBC radio show, Q.

Nathan appeared on the Kojo Nnamdi Show as well as HuffPo Live to discuss logging off and disconnection. He spoke on Al Jazeera English’s The Stream about the role of memes in the 2012 U.S. Presidential Election.

You can also find Nathan’s writing on the Snapchat company blog, where he is a researcher. Nathan is interested in and has published articles on how social media has triggered the rise of the digital “prosumer”.

Nathan is also a musician and photographer living in New York City.

Nathan can be seen in: