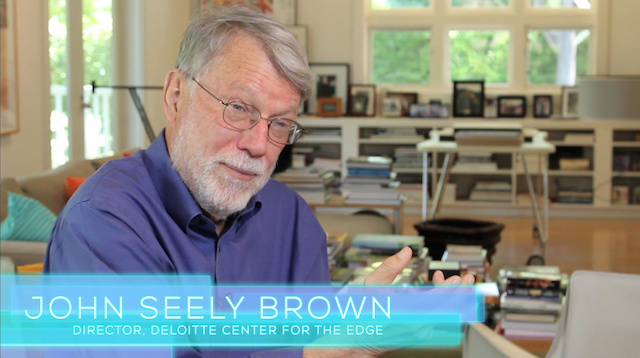 John Seely Brown is the Independent Co-Chairman of The Deloitte Center for the Edge. Prior to that, he was the Chief Scientist of Xerox Corporation and the director of its Palo Alto Research Center (PARC) — a position he held for nearly two decades.

While head of PARC, John expanded the role of corporate research to include such topics as the management of radical innovation, organizational learning, complex adaptive systems, and nano technologies. He was also a co-founder of the Institute for Research on Learning (IRL), a not-for-profit initially funded by the Xerox Corporation.

John graduated from Brown University in 1962 with degrees in physics and mathematics, and received a PhD from University of Michigan in 1970 in computer and communication sciences.

In all, je has published over 100 scientific papers. Along with Paul Duguid, he wrote The Social Life of Information, which has been translated into nine languages with a second addition.

John also teamed up with expert John Hagel to write, The Only Sustainable Edge, a book about new forms of collaborative innovation, and The Power of Pull: How Small Moves, Smartly Made Can Set Big Things In Motion.

John Seely Brown’s most current book is The New Culture of Learning, which he co-authored with Professor Doug Thomas at USC.

John is a visiting scholar and advisor to the Provost at University of Southern California (USC).

Part scientist, part artist and part strategist, John’s views are unique and distinguished by a broad view of the human contexts in which technologies operate and a healthy skepticism about whether or not change always represents genuine progress.

[Tweet “If you are willing to regrind your lenses, you just might be able to see the world afresh.”]

[Tweet “If you are willing to play with the system then change can be seen as an adventure.”]

[Tweet “In the avatar world you can construct your own genre as well as who you are.”]

John can also be seen in: