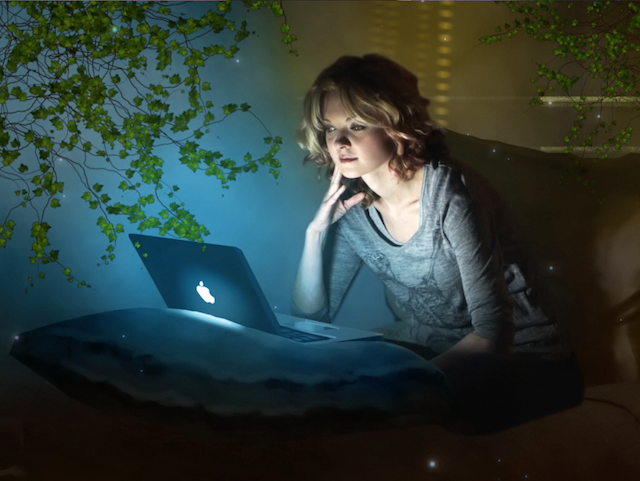 In this instalment of Avatar Secrets ‘Making Of’, we’re examining one of the first scenes to be rendered in full — The Fountain Scene.

The scene begins with a live action sequence of Ramona in her room and quickly morphs into an elaborate animated landscape as the viewer transitions from the real into the virtual world finally stopping at a town square with an elaborate fountain.

The first scene from Chapter Three (of 10 chapters), this scene comes on the heels of Ramona’s first quest, and marks the moment when she starts getting pulled into the virtual world, and the beginning of the exploration of community and connection in the digital world.

The fountain — located in the centre of the town square — is traditionally a hub of activity and a communal meeting point, and this scene explores the parallels between the town square and the digital world, as places where people meet and engage.

As we are all part of a virtual team — me in Toronto’s west end, Ramona and Michaele in the east end of the city, and Olney in Los Angeles — this Q&A was conducted by email. 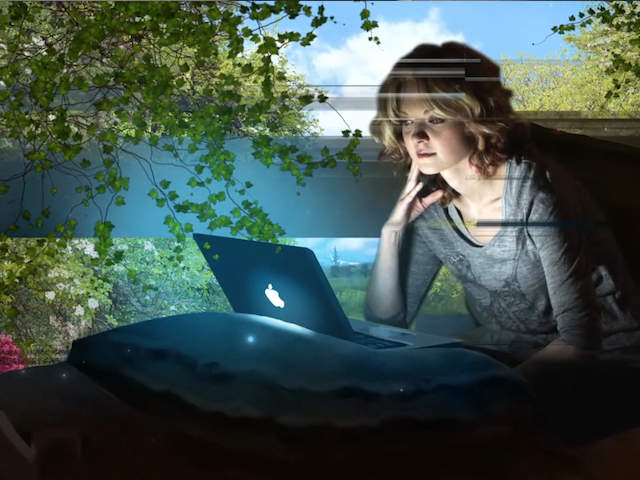 Julie: This is such a beautiful scene and it has so many ‘moving parts’ — from birds to clouds to a flowing fountain. What was the greatest challenge you faced when developing the scene?

Ramona: This was the first scene we rendered in full, so the challenge was about establishing what the project was going to look like! We were lucky to have a period of creative and technical R&D where we really broke apart the nuances of what we wanted to accomplish, what themes we were exploring, and how we would communicate it all through the visual and experience design.

The creative team all agreed that the scene had to be beautiful. And, that it had to create a feeling of awe. It also had to be real but magical, and communicate more than the words… more than the script.

At first we thought that the virtual world should be rendered in CG. But based on the style we developed in the storyboards, a hand drawn touch seemed to better encapsulate the humanity of the project.

There were a lot of versions of this sequence, until we got it. And then we just knew!

Olney:  The greatest challenge for me was that the whole project was dependent on what we decided to do with this one scene.  It took  longer than any of the other scenes because we were figuring out and committing to the visual motifs and the whole style of the project. We also had to be thinking ahead into how the visuals were going to work as the project evolved and different challenges arise… how we were going to be consistent. 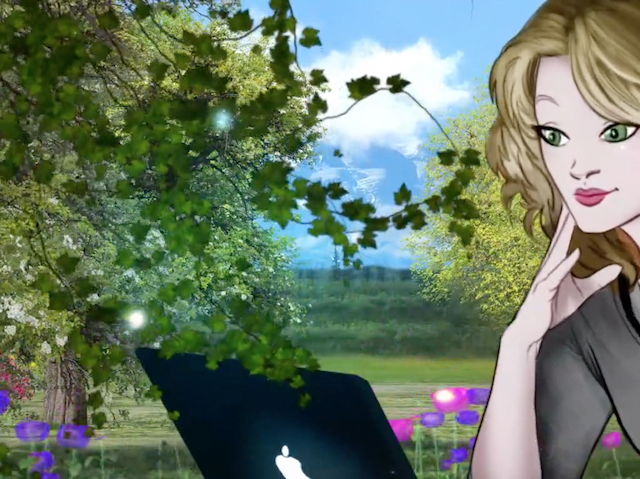 Michaele:  This scene became the prototype for Avatar Secrets, which meant that every detail had to be worked out stylistically. But, it also prepared us aesthetically for the challenges which lay ahead. There are no books on the subject of  ‘how to make  an interactive documentary’. We just put our creative brains to the test… together.

One of the earliest challenges we faced was how to create a landscape that had a period feel to it, but that at the same time emanated a sense of wonder. The landscape also had to capture the ‘newness’ of the virtual territory we were creating, and provide visual clues that would ‘prompt’ the viewer to explore the story interactively.

The Fountain Scene centres around a virtual town square, which needed to have a nostalgic aura to it reminiscent of a period piece from a bygone era, because the essence of the scene is about what the town square conveys to the human collective — a place to meet and talk. Visually we aimed to establish a uniquely hybrid space, where a visitor might have a deja vu moment, as if is probing a fleeting memory from the future.

The next challenge was to work out a visual and technical interactive system to connect our beautiful painted imagery seamlessly with our real life footage. 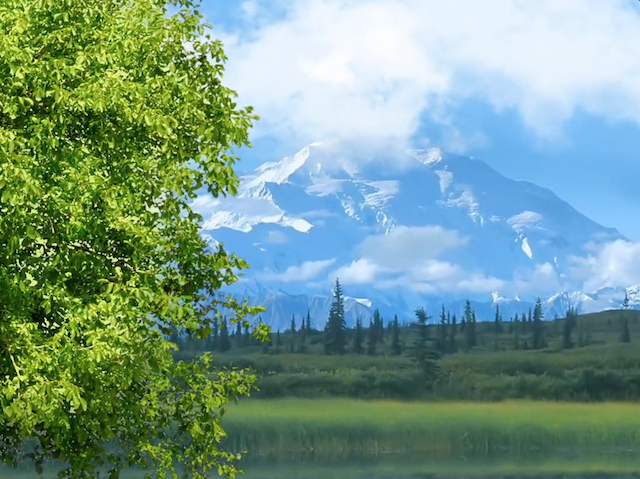 Julie: Was there a breakthrough moment for you when you… as Ramona says ‘just knew’?

Michaele: I loved the feel of the initial illustrations and right away could visualize a wonderful animated fountain in the centre of the town square, bringing life and motion to the scene with spraying water. The breakthrough moment for me was creating the perfect inviting fountain for the space… a fountain that looked like it had been there forever, but also virtual and fantastic.

Olney: I think the breakthrough moment for me was when we first got the illustrations back and saw how they could work with the photorealistic assets. The first time we saw the scene come to life with movement and particles, and sunshine and clouds, and real and virtual… Seeing all of that stuff together was when we realized what the project was going to be… what our vision was, and how we could get to that point. From there we started building out the Z axis moves and how we would move deeper between worlds. But, we can save that for another blog post 🙂 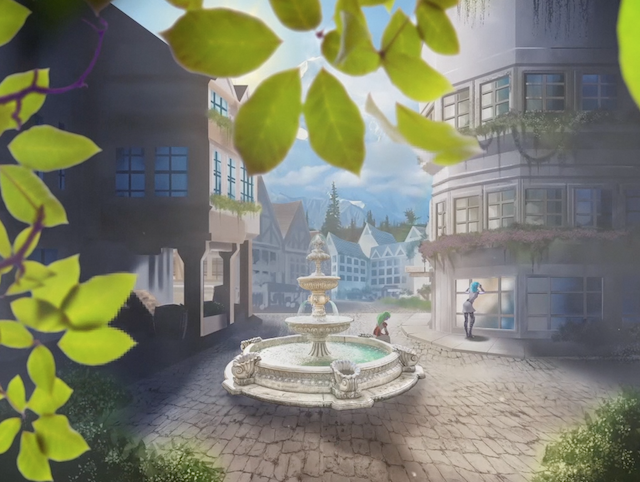 Ramona: For me, the style had to be purposeful. There is so much we’re trying to explore and communicate, that every visual choice we made, needed to tell the story. I wanted to find a way to visualize what I call the hybrid reality, the world we now live in where we are constantly straddling real and digital, constantly in both worlds, as opposed to traveling back and forth from “real” to virtual through tubes and tunnels, like earlier explorations of these themes.

I think the breakthrough moment was figuring out the “fragmenting” effect — the flickering effect between real and virtual — and also how the photorealistic elements would integrate with the illustrations.

The visual rendering needed to capture how real the virtual experience can be, and how much the digital world permeates our real world lives — and we knew we needed to come up with a new visual vocabulary that would be fresh, and yet totally understandable, totally readable at first glance. We tried a lot of effects, and seeing it all come together the first time was a thrill. 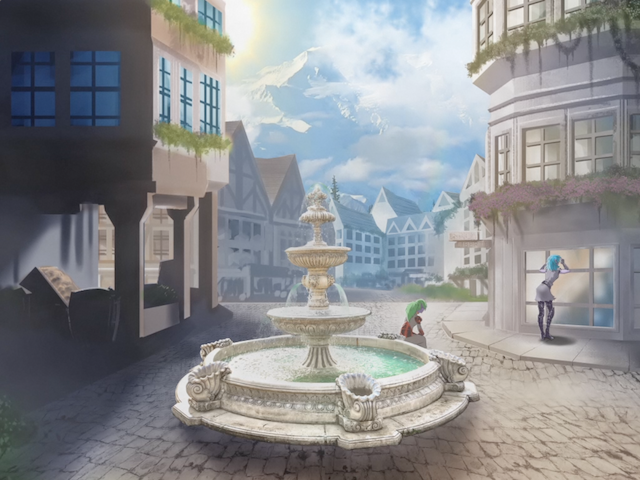 Julie: What was your favourite part of the scene?

Olney: I  love every part of the scene. I think we’ve created something unique. I don’t think it looks like anything else  — because we have a team of artists that put their own personal touch on everything we produced.

Ramona: I love the way the scene has the elements of collage, with different media and textures, but it all works together so harmoniously, so it’s not obvious, not jarring — that it is illustrated, but there is water flowing that looks real, that there are little details like photorealistic signs on the buildings, and flowers on the window sills.

Michaele: Ramona’s initial vision was really inspiring to us all. We all got excited about the challenge of doing something innovative.

It was a creative challenge for the team to find the perfect harmony of elements in the prototype… from drawing, painting and digital fine art to animation, footage, music, along with user interface and experience that pulls it all together. But, by the time we’d finished the prototype we’d established the creative and technical vision for the project.

Developing this scene gave me a tremendous positive feeling of how a team can work together to develop an interactive narrative. Once we’d worked out how we’d flicker between the virtual and real world states, I knew we were on our way!

Watch the development of the scene from early animatic, through the fountain test to the final render.

The Town Square And The Fountain: A Gathering Point For Community