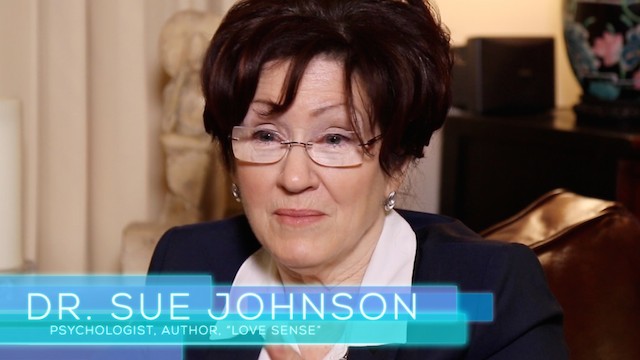 Dr. Sue Johnson is an author, clinical psychologist, researcher, professor and one of the leading innovators in the field of couples therapy.

She is the primary developer of Emotionally Focused Couples Therapy (EFT), which has demonstrated its effectiveness in over 25 years of peer-reviewed clinical research.

She trains therapists in EFT worldwide and consults to Veterans Affairs, the U.S. and Canadian military and New York City Fire Department.

Sue is founding Director of the International Centre for Excellence in Emotionally Focused Therapy and Distinguished Research Professor at Alliant University in San Diego, California as well as Professor of Clinical Psychology at the University of Ottawa, Canada.

Sue’s theory is that romantic love is based on an attachment bond. Through he work, she shows how to develop our “love sense” – our ability to develop long-lasting relationships.

[Tweet “Love is what makes you get up in the morning, it’s what gives life meaning.”]

[Tweet “The need to bond is innate. It is not conditioned, it is not learned.”]

Dr. Johnson can also be seen in:

How We Talk About Falling in Love